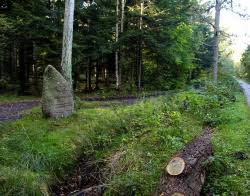 A beautiful old Danish traditional song that I have always loved.

If I knew a female Danish singer here in iCompositions I would have left the singing to her. But I don't. So you will have to settle with me.

This song is so old that noone knows who wrote it. Lyrics are first time recorded in 1864 by who is now believed to be the author Fritz Andersen.

I have myself written the piano solo and the choir part.

The Danish world famous jazz bass player Niels-Henning Ørsted Pedersen (who we all miss now) made it famous again in his legendary version where the melody is played on the double bass. Here recorded with Kenny Drew on piano.
http://www.youtube.com/watch?v=9PWEocxtcmM

And this Norwegian singer Sissel sings beautifully in Danish
http://www.youtube.com/watch?v=Q0MCuVgFO2A

I have provided the lyrics in Danish and a translation to English.

Should a Danish/Scandinavian singer pop up, I would love to re-publish it with a female voice.

EDIT EDIT: My dear Canadian friend Stan Loh heard this and wrote English lyrics for the song and sings it. Don't miss is. http://www.icompositions.com/music/song.php?sid=181363 Genre: Pop
Artists: Kenneth Lavrsen
Composer: Unknown
Lyrics: Fritz Andersen
Published: 30 Apr 2012
Copyright: 2012 Lyrics I Skovens Dybe Stille Ro
Danish Traditional Song
Music: Unknown
Lyrics: Assumed to be Fritz Andersen who published it in 1864 but it is not confirmed that he actually wrote it

In the forests's deep quiet tranquility
where the singer armies dwell,
where the soul listened many a time
to the bird's happy song;
there is idyllic quiet peace
in the forest's solitude,
and the heart's longings are quiet here
where peace and rest are.

Hear! village bell sounds down
announcing evening peace
the small bird before it goes to nap,
it is twittering another moment;
in the bog croaks highly a frog,
strongly steams field and lake;
now the bell silences - the evening's peace
quietly lowers itself down.
Edit  | Attach | Print version | History: r2 < r1 | Backlinks | View wiki text | Edit wiki text | More topic actions
Topic revision: r2 - 29 Feb 2020, KennethLavrsen
Music
Copyright © 1999-2020 by the contributing authors. All material on this collaboration platform is the property of the contributing authors.
This website only use harmless session cookies. See Cookie Policy for details. By using this website you accept the use of these cookies.